The E Type was in production until 1975 but underwent some changes along the way. The Series 1 was produced until 1968 (whereby all cars built in 1968 are unofficially called series 1 ½).

The series 2 was built from 1968 until 1971 incorporating changes demanded by the American authorities which were mainly the uncovered headlights bigger tail lights and higher rear bumpers. For the series 3, the XK engine was replaced by the V12 5.3 litre engine and the car gained a few inches and weight. 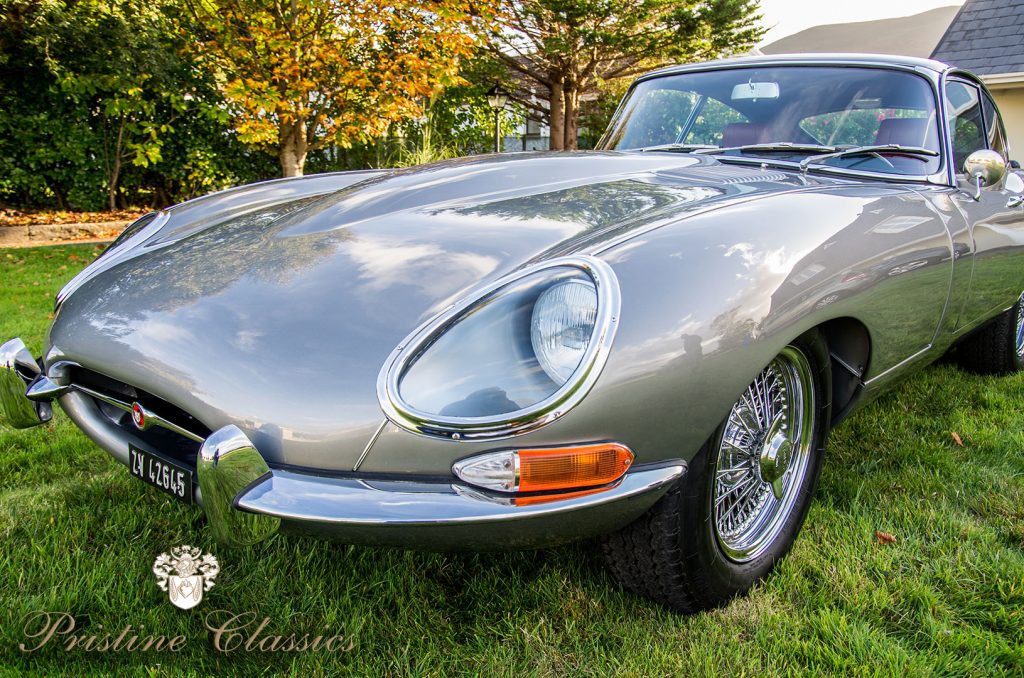 The vehicle was completely stripped to bare metal. All rust effected sections were removed and replaced with new sections or parts thereof. All joints and repairs are lead loaded (a method used by period car manufacturers instead of fillers) and finished with a layer of modern body finishing.

All brightwork was re-chromed and where necessary replaced.

The vehicle received a full re-spray in Opalescent Silver Grey consisting of:

The engine was fully rebuilt including:

The steering and suspension were dismantled, cleaned, stripped and re-painted. Every nut, bolt, bushing and bearing was either reconditioned or replaced with new parts. Polyurethane bushes was used throughout. Four new back springs and shock absorbers and front shock absorbers was fitted. A Harvey Baileys anti-roll bar system (handling kit) was fitted. The original steering column was used which will allow the steering wheel to be adjusted in deeps but not in height.

All new fuel pipes, as well as a new fuel tank and an upgraded SU fuel pump, was fitted.

All pipework (metal and rubber) was replaced with new pipes and the original heating system was restored.

All electrical and instrumentation work was reconditioned and a new wiring harness with a separate hazard warning light system was fitted as tidy as possible throughout the vehicle. A battery cut off switch was also fitted with a clock bypass. Head lights were fitted to European, i.e. left hand drive specifications. The battery compartment received a special asset absorbing bottom lining.

The interior of the car was insulated with sound and heat resisting matting. The upholstery was completed in red real leather. High quality fabrics and leathers were used. Alcantara headlining and a black leather dash was also fitted.

Seats were fitted with removable head rests. Period three point seat belts with Jaguar logo were be fitted on both sides. The luggage compartment and centre console was finished in the same leather than the seats and door cards and fitted with chrome luggage strips and new rubber inlays.